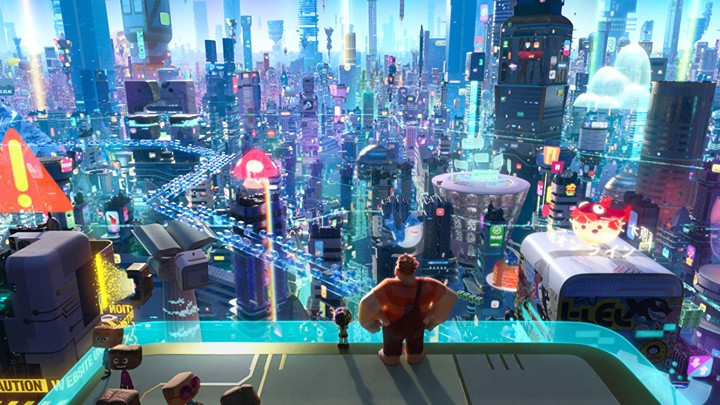 Ralph Breaks the Internet, the long awaited sequel to the 2012 film Wreck-it Ralph has arrived in theaters with a bang.

The movie takes place six years after the events of the previous film.  Ralph (John C. Reilly) and Vanellope (Sarah Silverman) remain best friends and they had the same routine after every shift of their video game jobs.  After work they meet up and hang out in the Litwak’s Family Fun Center and Arcade.   In addition, they have a root beer in the Tapper’s game.

However, Ralph accidentally caused Vanellope’s game, Sugar Rush to malfunction and lose the steering wheel.  Ralph then decided to take Vanellope out into the internet, go to eBay and purchase a new steering wheel in order to save her game.

What first caught my attention was the friendship between Ralph and Vanellope.  Vanellope wanted to explore and try new things and Ralph doesn’t want to let her go and lose a friend.  Seeing their friendship progress in the movie made it captivating.

Next came the design of the internet in the film.  The internet is placed as a futuristic, utopian world where certain platforms such as Instagram and Google are created as buildings.  Ads are designed as holograms and active users (meaning people who are using their computers at the moment) are sketched as tiny avatars.

Once Ralph and Vanellope traveled through the internet, I was trying to keep track of all of the characters and the technology references that were made.  It started to give me a reason to watch this movie a second time.

While I was viewing the internet in the Wreck-it Ralph world, I got to witness cameos of iconic animated characters and YouTube celebrities.  Some of which included Colleen Ballinger, the Disney Princesses, Sonic the Hedgehog, Dani Fernandez and Buzz Lightyear.

The humor in the movie did not disappoint me.  One example was when Ralph was trying to make so many trendy videos like eating a spicy pepper and putting his head on a goat’s body.  After all of that, I couldn’t stop laughing.

Although the design and animation of the film were engaging, the real stars were Reilly and Silverman.  The growth of their character’s friendship was relatable to friends and family.  Their story in the movie was compelling.

Bottom line, Ralph Breaks the Internet is a must-see movie for all ages.